The Science Behind Dr. VIOLiT 2™

On December 18, 2000, NASA News (release:00-366) states: NASA Space Technology Shines on Healing. Doctors at the Medical College of Wisconsin in Milwaukee have discovered the healing power of light with the help of technology developed for NASA’s Space Shuttle. “So far, what we’ve seen in patients and in laboratory cell cultures, all point to one conclusion”, said Dr. Harry Whelan, professor of pediatric neurology and director of hyperbaric medicine at the Medical College of Wisconsin, “the near- infrared light emitted by these LED’s seem to be perfect for increasing energy inside cells.” 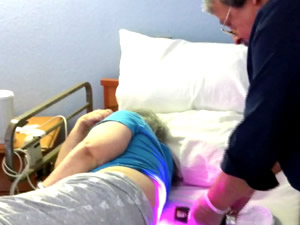 The human body is made up of approximately five billion individual cells, each cell must apply its own vital energy called ATP (adenosine triphosphate). Every job a cell must perform needs to be done with the aid of ATP. Light is the only medication which can directly increase the production of ATP. Our cell power plant, the Mitochondria, converts photon energy (light energy) into ATP (cell energy). This new fuel is then available to carry out the many repair and regenerative functions of our cells. In essence, there is more energy to expel waste products, and replace nutrients and proteins, the building blocks of our cells.

There is a rapid formation of many proteins, including collagen, a clear sticky substance, which is natures repair material. This newly formed collagen can then be used to regenerate tissue that once had been damaged. Getting light into the blood stream may boost the whole immune system and stimulate the production of Nitric Oxide (NO) which helps with muscle growth, experiments show that LED light of the proper wavelength promotes cell growth. 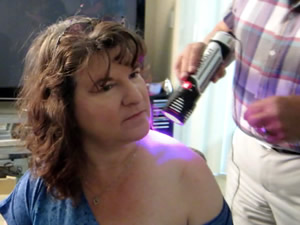 Skin, bone and muscle cells grown in cultures are exposed to the same light-emitting diodes used to treat wounds in patients and grow plants in space. Biologists at the Medical College of Wisconsin in Milwaukee have shown that cells exposed to the near-infrared light grow 150 to 200 percent faster than ground control cells not stimulated by light per a research project funded by NASA’s Marshall Space Flight Center in Huntsville, Ala.

PIONEERING A NEW ERA INTO THE HEALTH CARE & PAIN INDUSTRY

There is a unique innovative combination of LED light therapy, MAGNETIC WAVES, with Multi-VIBRATION frequency contained in the Dr. VIOLiT 2™. This device is pioneering a new era in the health care field and gives new possibilities and hope to millions of people suffering pain and degenerative illnesses in the US and around the world.

Note: Dr. VIOLiT 2 ™ is not intended to replace any doctor, prescription, or various treatments, but it is an important tool to integrate and compliment any therapy held by health practitioners in hospitals, clinics or by individual self-use at work or home.

Warning: Dr. VIOLiT 2 ™ is not intended for use by people with pacemakers, medical drug pumps, or women who are pregnant or breastfeeding. Keep 5 inches away from credit cards, cell phones, computers, CDs DVDs, digital cameras and any sensitive electronic device.